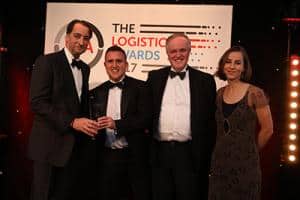 We are delighted to announce that Delamode was awarded a Chartered Institute for Transport and Logistics service excellence award at their annual awards ceremony, which was held at the Royal Lancaster Hotel.

The event is one of the most widely recognised and contested awards programmes within the industry and are designed to recognise achievement and encourage the highest standards and professional approaches to the practice of logistics, transport and operations.

Delamode won the service excellence award title for Information Management for the launch and development of its EshopWedrop BC2 cross border delivery service model. A service which provides Central and Eastern European consumers with the ability to buy goods online from western retailers and have them delivered to door, or to a collection point.

CILT’s Annual Awards ceremony is widely considered as the networking event of the year for professionals involved in the logistics and transport sectors, this is partly due to its recognition of the highest standards throughout the profession. Hosted by journalist and broadcaster Michael Portillo, 15 high profile awards were presented by Robin Proctor FCILT, President, CILT.

This site uses cookies to provide you with a more responsive and personalised service. By using this site you agree to our use of cookies as set out in our Privacy & Cookie notice Read more